The key to the promotion of food internationalization           What is "food diversity"?

Recently, “food diversity” has been gaining attention as a trend in the food industry. This article will explain the meaning of this concept, the age group who pays attention and the world where will bring about.

What is food diversity?

Food diversity refers to “diverse food needs” and the need to respond to these needs.

“Food diversity” is the current trend. Specifically, it refers to the diverse needs of food-related customs, religions, principles, beliefs, diseases, and health preferences. Overseas, where individualism and religious beliefs are high, there has been progress in addressing these needs. As the number of foreign visitors to Japan increases, there is a need to develop a response to this diversity in Japan. In particular, since enjoying food is the most important purpose of visiting Japan, the entire country is working at a rapid pace to develop that diversity.

Although there are innumerable food needs in various parts of the world, we will focus on those with food restrictions that are expanding or taking root on a global scale. For the sake of convenience, we have classified the food restrictions into three main categories: “disease,” “religion,” and “principle and preference. We tried to classify in more detail from there. See Appendix A. In this section, we will focus on the subjects that have attracted particular attention in recent years and explain them in detail. 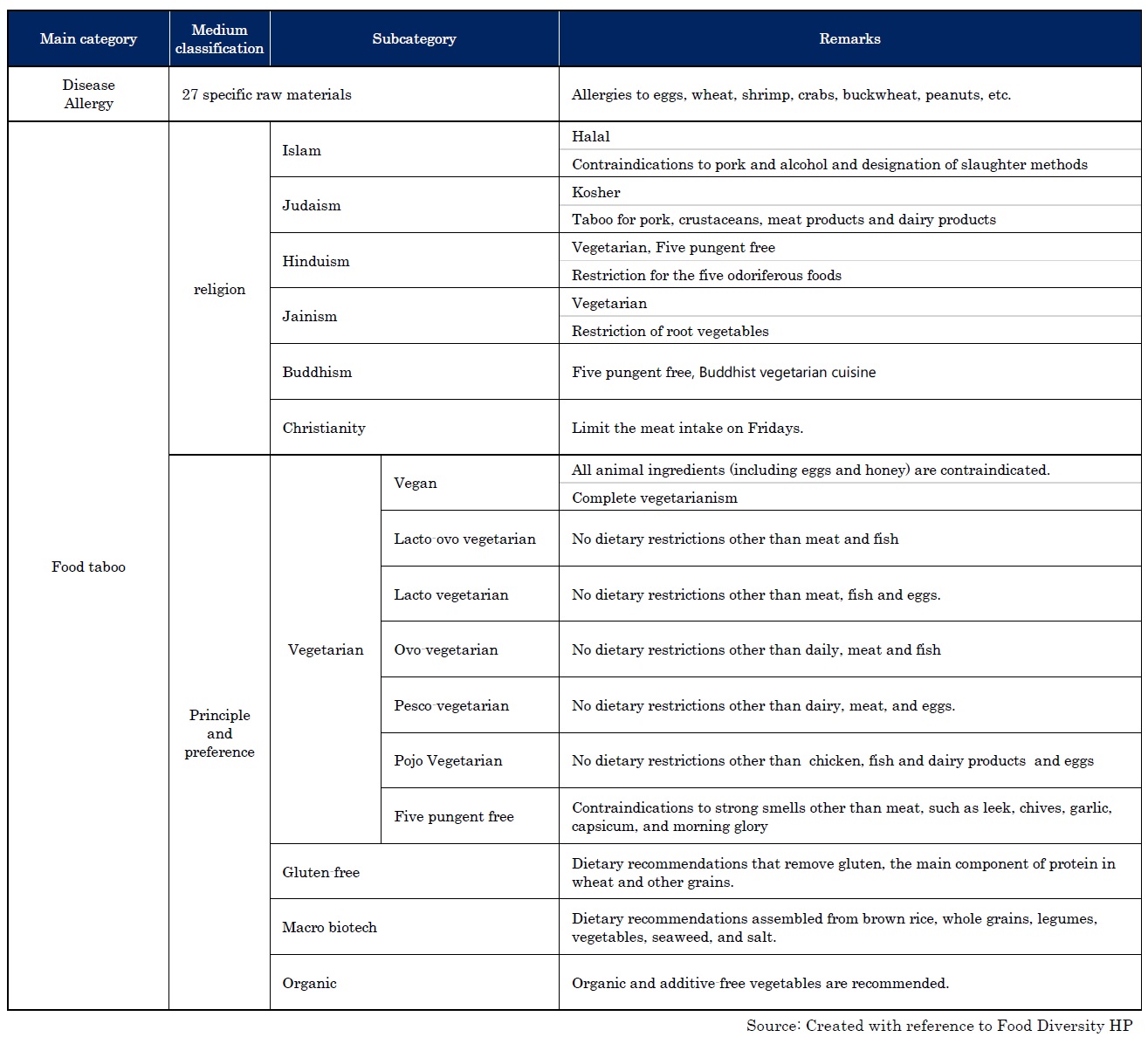 ～International attention is being paid to the issue of food abstinence based on religion and religious preference.～

In this section, I would like to focus on Islam, Judaism, and vegetarianism, which have food restrictions in the “religion” and “principle-oriented” categories that are currently attracting attention and are being addressed worldwide. See Appendix Table B for their population, number of visits to Japan, and number of residents.

In 2010, the number of Muslims reached 1.6 billion, accounting for 23.2% of the world’s population. Moreover, more than 60% of Muslims live in the Asia-Pacific region, which is close to Japan. The birth rate tends to be higher in areas with large Muslim populations, and it is predicted that Muslims will account for 35% of the world’s population by 2100, overtaking Christians as the world’s number one religion.
The number of Muslims visiting Japan has more than quadrupled in the past two years, and currently stands at 1.18 million per year. An important point to consider is how to deal with food restrictions. They are only allowed to consume Halal food, which is allowed by their religion, and it is necessary to sell foodstuffs and offer menus in accordance with this. The main restrictions on food include the prohibition of pork and alcohol, and the specification of slaughtering methods.


Judaism is a small but economically influential religion.

The Jewish population is limited to 14.6 million, with the US and Israel alone occupying for 80% of the total. In Israel, more than 75% of the population is Jewish. Many people in Israel are friendly to Japan due to the support of Japanese people such as Mr. Chiune Sugihara and the recent animation boom. There are also plans to start direct flights to Israel from Japan, and it is expected that the number of visitors to Japan will increase.
On the other hand, in the U.S., there are a large number of residents, mainly in the state of New York, and they account for 1.7% of the total U.S. population. Jews have more political and economic influence than their percentage of the population, accounting for 2% of all seats in the U.S. Congress and 20% of the top 50 political and business leaders.
In particular, there are many Jews in the financial industry, and in recent years, many Jews have been active in the film industry, medical, law firm, academic, and the arts.
Although the number of Jewish visitors to Japan is small, 63,000 people, the percentage of the total Jewish population visiting Japan is 0.43%, higher than that of Muslims and vegetarians, and continues to increase every year.
Like Muslims, they also have religious food restrictions, but the environment in Japan is not nearly as accommodating as it could be and needs to be improved. The main food restrictions are pork, specified slaughtering methods, crustaceans, and the prohibition of mixing meat and dairy products.


Vegetarianism is spreading rapidly among the wealthy.

Vegetarianism is one of the major food restrictions in the world. There are currently 630 million vegetarians in the world, with 1.53 million visiting Japan, and the number is increasing every year.
This segment of the population voluntarily restricts their diet based on principles, beliefs, and preferences such as animal welfare, environmental issues, and health consciousness.
There are various types of vegetarians depending on the level of restriction. They are spreading mainly among the wealthy, and the ratio tends to be higher in areas with higher income levels. Among these vegetarians, the number of “vegans,” who are completely vegetarian, is rapidly increasing. In the U.S., the number of vegans has grown at an astonishing rate, increasing 500-times in three years. Taiwanese, who have a large number of visitors to Japan, also have a high percentage of vegetarians which is 13%. In addition to meat and fish, many of them do not consume “five pungent ingredients”, which are known as “oriental veggies”. The number of vegetarians in Japan has also been increasing in recent years, and the demand for vegetarian food in the country is growing.

The World of Food Diversity Support

～Taking Japanese Food to a New Stage through Internationalization～

Due to the declining birthrate and aging population, Japan’s market is expected to shrink due to a decrease in the absolute number of people and a decline in consumer confidence. On the other hand, the number of people from all over the world who are interested in Japanese food is increasing, and the number of visitors to Japan is also increasing in proportion. However, since Japan is basically made up of a single ethnic group, the environment for accepting foreigners is far from perfect. In particular, Japan has been lagging behind in dealing with food diversity, and there is an urgent need for improvement.

Throughout its long history, Japanese food has evolved by flexibly accepting outside influences. In addition, Japanese food is regarded as “healthy” and of “high quality” by the world. These characteristics of Japanese food make it easy to promote “food diversity”.
Although the global spread of the coronavirus is making it difficult to see the future, the number of visitors to Japan is expected to increase significantly after the virus ends, due to the reaction to the virus and the holding of global events.
Now is the best time to take the next action, because you have more time to prepare.

※MASDAC translated and posted the contents that Mr. Kikkawa contributed to MASDAC News in June 2020.